I wrote a guest post for Inclusive Church: you can read it here.

(I wrote this privately a few months ago and have decided to share it now.)

My comment was: “This phenomenon is why it took til my thirties for me to realise that I was trans.”

This had such a strong effect on my teenage experience that I can’t imagine where I would have been (or when) if the world had been set up differently. ‘Boys Don’t Cry’ came out in 1999, when I was twenty, at university. I read about it in Diva, described unambiguously as a lesbian film. Every time I read or watched someone who felt like a man or a boy and had to deal with that in a female-coded body, I was told that that was butch dyke experience. Idgie Threadgoode (in the book of Fried Green Tomatoes) is a butch dyke; Stephen Gordon in The Well of Loneliness is a butch dyke; Leslie Feinberg was a butch dyke; in the short fiction I found, P. Califia and others with similar self-descriptions and presentations were butch dykes.

Some of the real-life people came out as trans later on; some of the fictional and fictionalised characters have been re-examined and some position themselves or are claimed as ‘maybe’s in more than one category – and gender identity and sexuality are complicated and interlinked and did I say complicated? But the fact that I never heard any of these figures described as even maybe-trans, as anything but butch dykes, meant that I had no other box to put myself in.
There was one trans man on TV when I was in my late teens – Stephen Whittle, seeming like a nice chap but not like a role model for me at all, because our lives and experiences were so different.

Of course, I was a weird butch lesbian because I persisted in being attracted to men and having relationships with them as well as with women, but that didn’t (and doesn’t) feel incompatible to me. I was a butch dyke (who happened to be bi), because people who carried around buckets of sadness at not being seen as boys or men were butch dykes. (I was aware of butch dykes who were happy being women too; they were not the ones I identified with and I didn’t think about them a lot.)

In some ways it’s not a problem that I only came across genderqueerness as a concept at the end of my twenties, and through it broader understandings of the possibilities of trans masculinity, and ultimately an understanding of myself as trans… because I wasn’t utterly miserable that whole time. I wasn’t in a well of loneliness. I was generally accepted as myself in my boys’ clubs and my girls’ clubs, and my times of discomfort were mostly around trying to be a girl in the girls’ club rather than an exception to the rule. And I am butch; I’m just definitely not a dyke.

I am so much happier, though, now that I have the vocabulary to explain who I am, and know the granular options for a transition that’s me rather than a set menu, and can ask to be seen and acknowledged not as a slightly-off version of other things but as a real and true me.

Some people don’t want to wear a gender at all. Any gender that’s put on them ends up in a heap on the floor by the sofa or left on a peg in the hall.

Some people who feel moved (or compelled) to wear a gender
are happy with the one their parents picked for them, or a uniform one they got at school,
or they pick one from a catalogue, smart, ready-made.

Some of us pick up second hand parts of genders from swaps or shops,
trim the extra off and re-hem; layer this shiny one over this smooth one; let the holes in this one fray; use the bits of this for patchwork; unravel and re-knit.

I did a guest post at Neutrois Nonsense, about being out at work as a trans, genderqueer person, as part of their Featured Voices series.

I’m Fred and I’m transgender – my gender doesn’t match the ‘girl’ label assigned to me by society as a baby. My gender’s non-binary – neither ‘man’ nor ‘woman’ but a genderqueer mixture.

When I talk about this gender mixture, I’m not talking about stereotyped traits of masculinity and femininity, but something much less tangible about the internal self. Layered over this internal gender identity, people outwardly express their gender in many ways; this outward expression is often about a desire (conscious or not) to be ‘read’ correctly by other people. Gender presentation might include clothes and accessories, hairstyles, patterns of speech and body language, and the various signals might be mixed and layered to express the nuances of identity. The signals might be carefully thought through or not thought about at all at a conscious level. Most people think of themselves and present themselves as men or as women (or girls or boys); a significant minority (including me) think of themselves as neither or both, and might present themselves in ways that express that.

I perceive myself and present myself to the world as a mixture of man and woman, masculine and feminine, with a definite overtone of masculinity. If we think of gender as a spectrum like this (blue for man and red for woman)…

… I’m somewhere between the second and third splodge from the left: not a man but nearer the masculine end of the spectrum.
Other people I’ve talked with about this have placed themselves at different points on the spectrum – some firmly at one end or another; some in different places in the middle bit.

Some people experience their gender identity changing over time, or being at different places at different times or in different circumstances. Some of those people might describe themselves as genderfluid.

(In fact there are way more layers and directions that the chart doesn’t address, because gender’s really complicated – but that’s also what makes it so interesting.)

Some people I’ve talked with about gender identity get confused about why I think it’s important. “I’m just me – I don’t really think about that stuff.” “I don’t know where I am on that spectrum – it doesn’t matter.” “I don’t feel like I’m not a woman, but I don’t feel strongly womanly or feminine either.” There isn’t a strong correlation between this and whether or not someone’s transgender: it’s not just that people whose gender identity matches the one assigned to them don’t have to think about it.

Some people – I’m one – have a very intense sense of gender identity. I don’t feel like the colours are irrelevant to me: I feel like I’m overflowing with my particular mixture of them.

Some people identify themselves as agender – not having a gender identity – so the spectrum of colours doesn’t work for them.

My working hypothesis is that the chart needs another dimension. Instead of the one line

it should be more like a grid or paint chart:

So identities can vary in …let’s call it “hue”

and also in intensity:

I’m somewhere towards the bottom left: quite masculine, and intensely gendered. 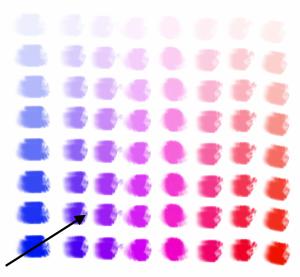 – and this is me being visible as a transgender person. I’m doing this because it’s relatively safe for me to be open about my gender identity: my job’s safe; my family’s safe; my relationships are safe. Lots of trans people find that it’s not safe to be open about being trans, and I hope that each person who is open makes the world a tiny bit safer for the next person.

The words I use describe who I am are “non-binary gendered” and “genderqueer”. That means I fit somewhere between “man” and “woman” – sort of neither and sort of both.
I’ve been identifying as “butch” for a long time, but in the last few years as I’ve learned more about what labels people use and thought more about my own, the boxes of “woman” and “man” feel too inaccurate for me to occupy them comfortably.

I also describe myself as “transgender” or “trans” – my gender doesn’t match the ‘girl’/’woman’ label that was assigned to me when I was born. Transgender/trans is more of an umbrella term and can apply to men and to women as well as to people with a non-binary identity.

I’ve identified myself as genderqueer for a few years, publicly but without any big announcements – but I’m conscious that it’s a thing I drop hints about and skirt round the edges of, and I prefer to be clear and direct.

None of this means I’m a different person from who you thought you knew: I’m still just me. These are just more accurate words for describing me.

Some transgender people change their name to something that feels like a better fit for their gender. [Edit: I have since changed my name – please call me Fred! I’ve edited the following paragraph to reflect my newer name and pronoun choice.]

There are several options for third-person pronouns which are gender neutral— i.e. not ‘he’ or ‘she’. “They” is the one that ‘s most commonly used by non-binary people (“Have you met Fred? They’re the IT officer.”)

An estimated 0.4% of the UK population has a non-binary gender identity.
It’s not currently possible in the UK for identity documents such as passports and driving licences to show a non-binary gender, although there is an early day motion to facilitate that, currently supported by 80 MPs: http://www.parliament.uk/edm/2014-15/47
Where it is possible for records about me to accurately reflect my gender, I’d like them to, and I’m working on this.

Trans Media Watch has a good introductory document: it’s made for people in the media but I think it’s a pretty good general introduction: http://www.transmediawatch.org/Documents/non_binary.pdf